39.4 per cent -THE PLUNGE IN DOLLAR VOLUME (AKA THE ARRESTING NUMBER)

Those numbers, which represent the total value of properties sold, tell the story of Toronto’s slumping housing market.

They highlight the drop in sales, the decline in prices, and the changing mix of what’s selling since the Ontario government and the commercial bank regulator moved to cool what had been a bubbly market.

As The Globe and Mail’s Janet McFarland reports, the latest numbers show sales continued to fall in May, with prices also down, though stabilizing.

Sales slumped 22 per cent in May from a year earlier, according to Toronto Real Estate Board numbers released Monday, while average prices fell 6.6 per cent, though gained 1.1 per cent from April.

The change in dollar volume is arresting, to say the least, as the numbers above show.

“Aside from the overall dip in sales year over year, we have also seen a shift in the composition of deals, particularly at the high end of the market,” said Jason Mercer, the board’s director of market analysis.

He cited as a “good example” the change in prices for detached homes in the area of $2-million-plus.

“Last year, we had over 2,000 sales of $2-million-plus detached homes through the first five months of the year, whereas this year the number of sales is just over 700,” Mr. Mercer said.

This is showing up elsewhere, too. Consider that last week’s report from Statistics Canada on first-quarter economic growth showed housing slipping at an annual pace of more than 7 per cent.

This follows Ontario’s Fair Housing Plan, introduced to cool inflated markets in and around Toronto, and new mortgage-qualification rules from the Office of the Superintendent of Financial Institutions, which kicked in at the beginning of this year.

“Keep in mind that sales began plunging in May, 2017, so year-over-year improvements are inevitable at this juncture,” said Bank of Montreal senior economist Robert Kavcic, noting the most recent 22-per-cent drop compared to a 36-per-cent annual slide in April.

Culled from: THE GLOBE AND MAIL, 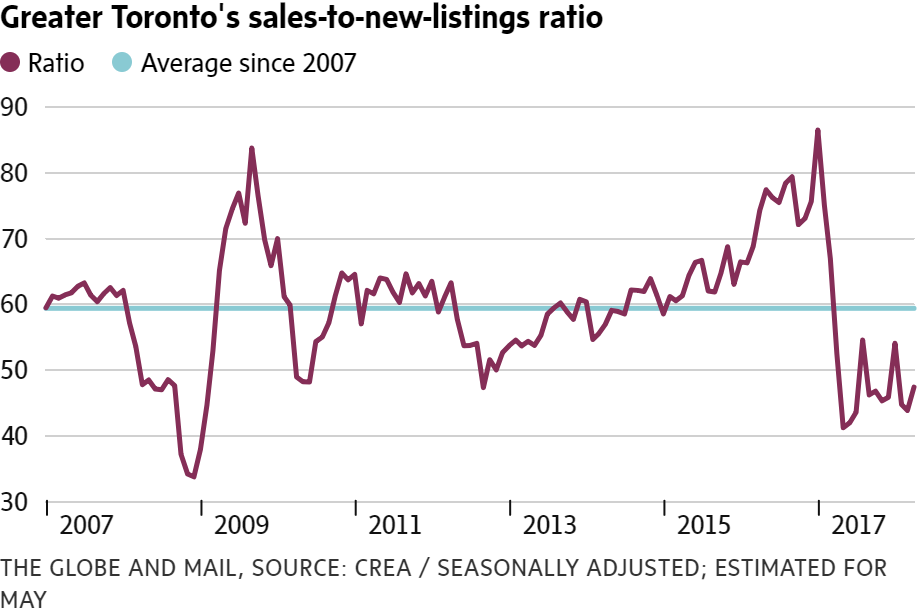